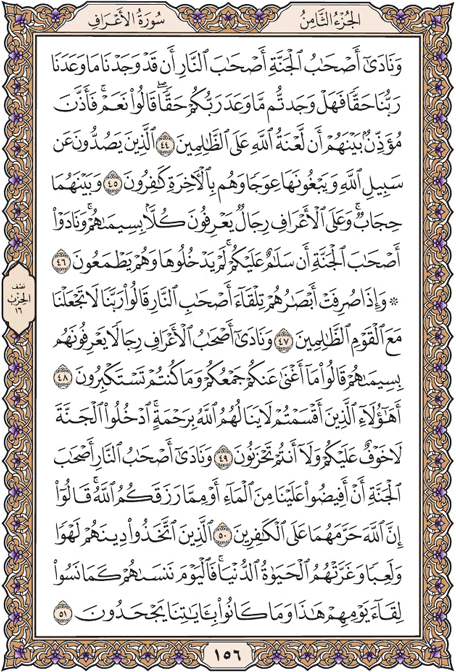 And the inmates of Paradise will call to the residents of Hell: "We have found that the promise made to us by our Lord was true. Have you also found the promise of your Lord to be true?" They will answer: "Yes (it is so)." Then a crier will call from among them: "The curse of God be on the vile,

"Who obstruct those who follow the path of God and try to make it oblique, who do not believe in the life to come."

There will be a veil between them, and on the wall will be the men (of al-A'raf) who will recognise everyone by their distinguishing marks, and will call to the inmates of Paradise: "Peace on you," without having entered it themselves though hoping to do so.

When their eyes fall on the inmates of Hell they will say: "O Lord, do not place us in the crowd of the vile."

Recognising them by their marks the men of al-A'raf will call (to the inmates of Hell): "Of what use was your amassing (of wealth) of which you were proud?"

(Then pointing to the inmates of Paradise, they will say): "Are they not those of whom you had sworn and said: 'God will not have mercy on them?' (And yet they have been told,) 'Enter Paradise where you will have no fear or regret.'"

Those in Hell will call to the inmates of Paradise: "Pour a little water over us, or give us a little of what God has given you." They will answer: "God has verily forbidden these to those who denied the truth.

"Who made a sport and frolic of their faith and were lured by the life of the world." As they had forgotten the meeting of this Day so shall We neglect them today for having rejected Our signs.