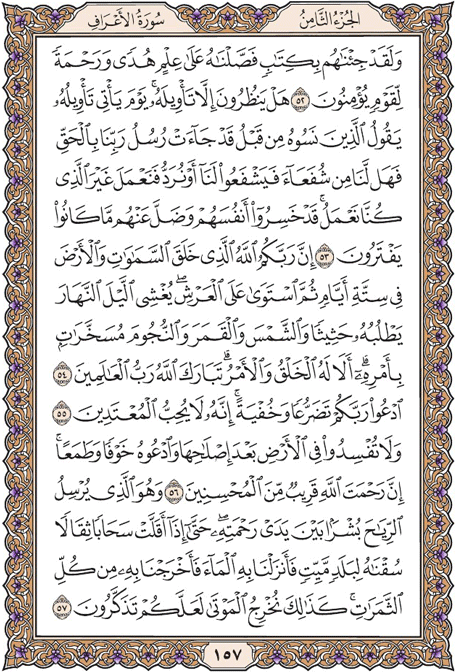 And We had certainly brought them a Book which We detailed by knowledge - as guidance and mercy to a people who believe.

Do they await except its result? The Day its result comes those who had ignored it before will say, |The messengers of our Lord had come with the truth, so are there [now] any intercessors to intercede for us or could we be sent back to do other than we used to do?| They will have lost themselves, and lost from them is what they used to invent.

Indeed, your Lord is Allah , who created the heavens and earth in six days and then established Himself above the Throne. He covers the night with the day, [another night] chasing it rapidly; and [He created] the sun, the moon, and the stars, subjected by His command. Unquestionably, His is the creation and the command; blessed is Allah , Lord of the worlds.

Call upon your Lord in humility and privately; indeed, He does not like transgressors.

And cause not corruption upon the earth after its reformation. And invoke Him in fear and aspiration. Indeed, the mercy of Allah is near to the doers of good.

And it is He who sends the winds as good tidings before His mercy until, when they have carried heavy rainclouds, We drive them to a dead land and We send down rain therein and bring forth thereby [some] of all the fruits. Thus will We bring forth the dead; perhaps you may be reminded.