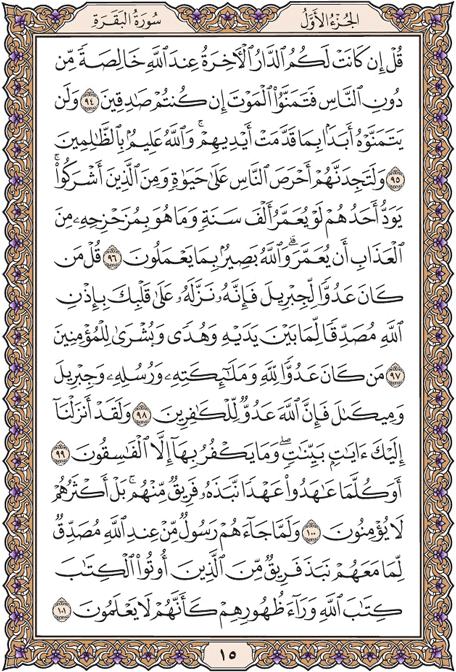 Say, [O Muúammad], |If the home of the Hereafter with Allah is for you alone and not the [other] people, then wish for death, if you should be truthful.

But they will never wish for it, ever, because of what their hands have put forth. And Allah is Knowing of the wrongdoers.

And you will surely find them the most greedy of people for life - [even] more than those who associate others with Allah . One of them wishes that he could be granted life a thousand years, but it would not remove him in the least from the [coming] punishment that he should be granted life. And Allah is Seeing of what they do.

Say, |Whoever is an enemy to Gabriel - it is [none but] he who has brought the Qur'an down upon your heart, [O Muúammad], by permission of Allah , confirming that which was before it and as guidance and good tidings for the believers.

And We have certainly revealed to you verses [which are] clear proofs, and no one would deny them except the defiantly disobedient.

Is it not [true] that every time they took a covenant a party of them threw it away? But, [in fact], most of them do not believe.

And when a messenger from Allah came to them confirming that which was with them, a party of those who had been given the Scripture threw the Scripture of Allah behind their backs as if they did not know [what it contained].