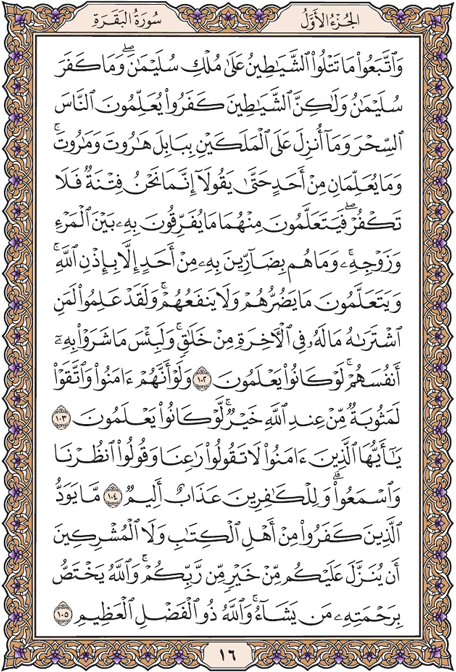 And they followed [instead] what the devils had recited during the reign of Solomon. It was not Solomon who disbelieved, but the devils disbelieved, teaching people magic and that which was revealed to the two angels at Babylon, Harut and Marut. But the two angels do not teach anyone unless they say, |We are a trial, so do not disbelieve [by practicing magic].| And [yet] they learn from them that by which they cause separation between a man and his wife. But they do not harm anyone through it except by permission of Allah . And the people learn what harms them and does not benefit them. But the Children of Israel certainly knew that whoever purchased the magic would not have in the Hereafter any share. And wretched is that for which they sold themselves, if they only knew.

And if they had believed and feared Allah , then the reward from Allah would have been [far] better, if they only knew.

O you who have believed, say not [to Allah 's Messenger], |Ra'ina| but say, |Unthurna| and listen. And for the disbelievers is a painful punishment.

Neither those who disbelieve from the People of the Scripture nor the polytheists wish that any good should be sent down to you from your Lord. But Allah selects for His mercy whom He wills, and Allah is the possessor of great bounty.