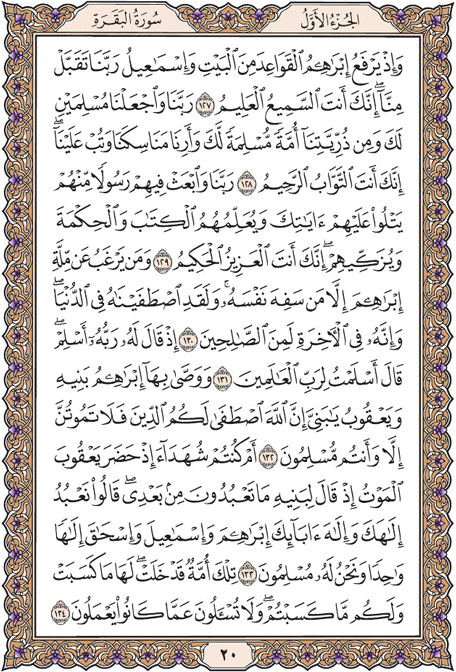 And [mention] when Abraham was raising the foundations of the House and [with him] Ishmael, [saying], |Our Lord, accept [this] from us. Indeed You are the Hearing, the Knowing.

Our Lord, and send among them a messenger from themselves who will recite to them Your verses and teach them the Book and wisdom and purify them. Indeed, You are the Exalted in Might, the Wise.

And who would be averse to the religion of Abraham except one who makes a fool of himself. And We had chosen him in this world, and indeed he, in the Hereafter, will be among the righteous.

When his Lord said to him, |Submit|, he said |I have submitted [in Islam] to the Lord of the worlds.

And Abraham instructed his sons [to do the same] and [so did] Jacob, [saying], |O my sons, indeed Allah has chosen for you this religion, so do not die except while you are Muslims.

Or were you witnesses when death approached Jacob, when he said to his sons, |What will you worship after me?| They said, |We will worship your God and the God of your fathers, Abraham and Ishmael and Isaac - one God. And we are Muslims [in submission] to Him.

That was a nation which has passed on. It will have [the consequence of] what it earned, and you will have what you have earned. And you will not be asked about what they used to do.