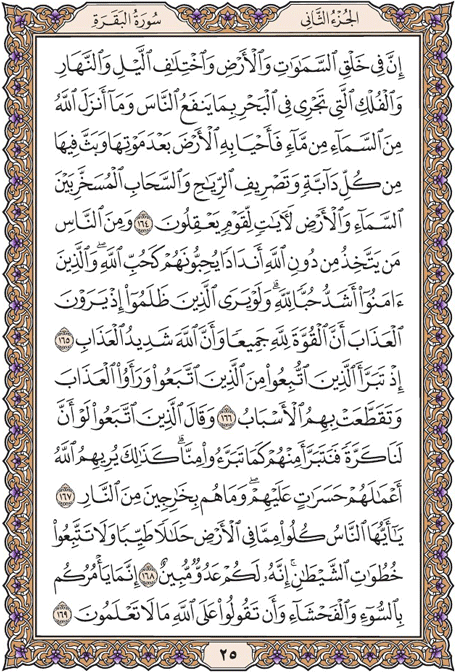 Indeed, in the creation of the heavens and earth, and the alternation of the night and the day, and the [great] ships which sail through the sea with that which benefits people, and what Allah has sent down from the heavens of rain, giving life thereby to the earth after its lifelessness and dispersing therein every [kind of] moving creature, and [His] directing of the winds and the clouds controlled between the heaven and the earth are signs for a people who use reason.

And [yet], among the people are those who take other than Allah as equals [to Him]. They love them as they [should] love Allah . But those who believe are stronger in love for Allah . And if only they who have wronged would consider [that] when they see the punishment, [they will be certain] that all power belongs to Allah and that Allah is severe in punishment.

[And they should consider that] when those who have been followed disassociate themselves from those who followed [them], and they [all] see the punishment, and cut off from them are the ties [of relationship],

Those who followed will say, |If only we had another turn [at worldly life] so we could disassociate ourselves from them as they have disassociated themselves from us.| Thus will Allah show them their deeds as regrets upon them. And they are never to emerge from the Fire.

O mankind, eat from whatever is on earth [that is] lawful and good and do not follow the footsteps of Satan. Indeed, he is to you a clear enemy.

He only orders you to evil and immorality and to say about Allah what you do not know.