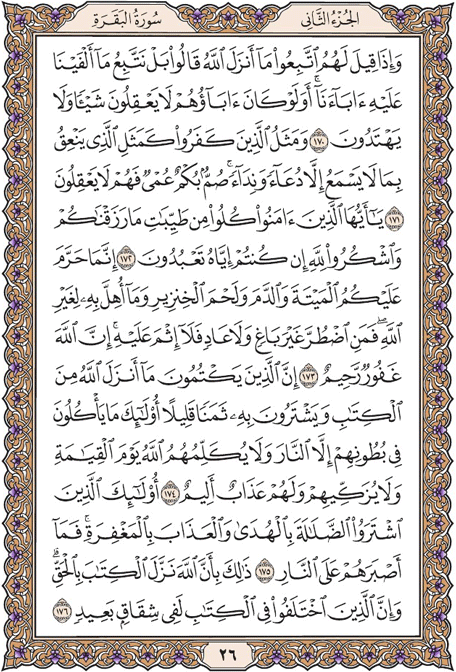 And when it is said to them, |Follow what Allah has revealed,| they say, |Rather, we will follow that which we found our fathers doing.| Even though their fathers understood nothing, nor were they guided?

The example of those who disbelieve is like that of one who shouts at what hears nothing but calls and cries cattle or sheep - deaf, dumb and blind, so they do not understand.

O you who have believed, eat from the good things which We have provided for you and be grateful to Allah if it is [indeed] Him that you worship.

He has only forbidden to you dead animals, blood, the flesh of swine, and that which has been dedicated to other than Allah . But whoever is forced [by necessity], neither desiring [it] nor transgressing [its limit], there is no sin upon him. Indeed, Allah is Forgiving and Merciful.

Indeed, they who conceal what Allah has sent down of the Book and exchange it for a small price - those consume not into their bellies except the Fire. And Allah will not speak to them on the Day of Resurrection, nor will He purify them. And they will have a painful punishment.

Those are the ones who have exchanged guidance for error and forgiveness for punishment. How patient they are in pursuit of the Fire!

That is [deserved by them] because Allah has sent down the Book in truth. And indeed, those who differ over the Book are in extreme dissension.