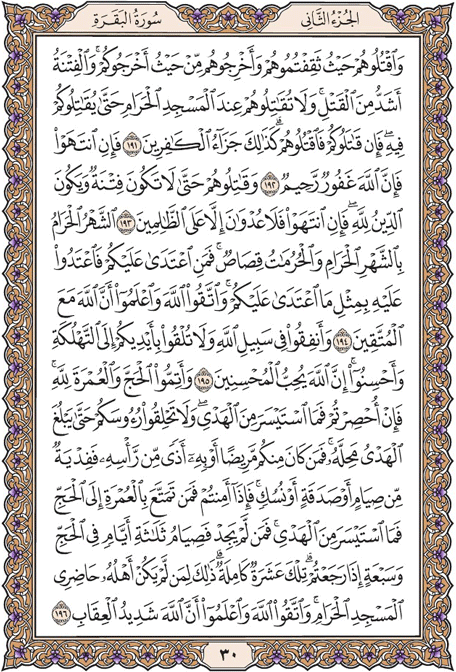 And fight those (who fight you) wheresoever you find them, and expel them from the place they had turned you out from. Oppression is worse than killing. Do not fight them by the Holy Mosque unless they fight you there. If they do, then slay them: Such is the requital for unbelievers.

But if they desist, God is forgiving and kind.

Fight them till sedition comes to end, and the law of God (prevails). If they desist, then cease to be hostile, except against those who oppress.

(Fighting during) the holy month (if the sanctity) of the holy month (is violated) is (just) retribution. So if you are oppressed, oppress those who oppress you to the same degree, and fear God, and know that God is with those who are pious and follow the right path.

Spend in the way of God, and do not seek destruction at your own hands. So do good for God loves those who do good.

Perform the pilgrimage and holy visit ('Umra, to Makkah) in the service of God. But if you are prevented, send an offering which you can afford as sacrifice, and do not shave your heads until the offering has reached the place of sacrifice. But if you are sick or have ailment of the scalp (preventing the shaving of hair), then offer expiation by fasting or else giving alms or a sacrificial offering. When you have security, then those of you who wish to perform the holy visit along with the pilgrimage, should make a sacrifice according to their means. But he who has nothing, should fast for three days during the pilgrimage and seven on return, completing ten. This applies to him whose family does not live near the Holy Mosque. Have fear of God, and remember that God is severe in punishment.