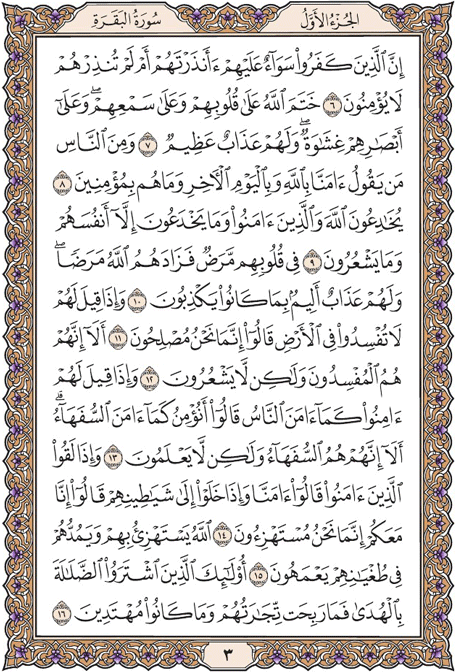 As for those who deny, it is all the same if you warn them or not, they will not believe.

God has sealed their hearts and ears, and veiled their eyes. For them is great deprivation.

And there are some who, though they say: "We believe in God and the Last Day," (in reality) do not believe.

They (try to) deceive God and those who believe, yet deceive none but themselves although they do not know.

Sick are their hearts, and God adds to their malady. For them is suffering for they lie.

When asked to desist from spreading corruption in the land they say: "Why, we are reformers."

Yet they are surely mischief-mongers, even though they do not know.

When asked to believe as others do, they say: "Should we believe like fools?" And yet they are the fools, even though they do not know.

When they meet the faithful they say: "We believe;" but when alone with the devils (their fellows), they say: "We are really with you; we were joking."

But God will turn the joke against them and allow them to sink deeper into evil and wander perplexed in their wickedness.

They are indeed those who bartered away good guidance for error and gained nothing from the deal, nor found the right way.