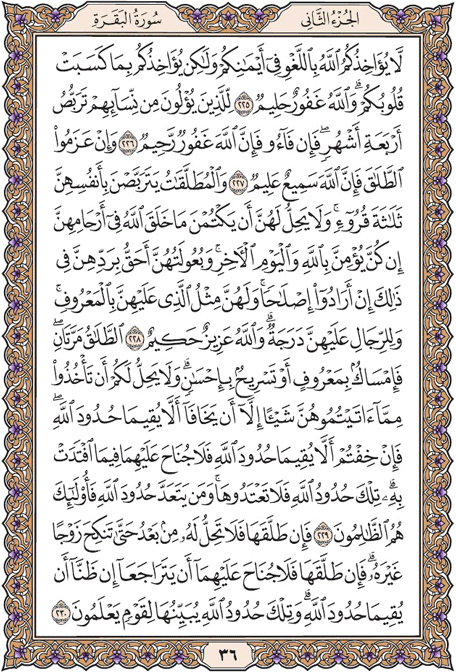 For those who swear not to have sexual relations with their wives is a waiting time of four months, but if they return [to normal relations] - then indeed, Allah is Forgiving and Merciful.

And if they decide on divorce - then indeed, Allah is Hearing and Merciful.

Divorced women remain in waiting for three periods, and it is not lawful for them to conceal what Allah has created in their wombs if they believe in Allah and the Last Day. And their husbands have more right to take them back in this [period] if they want reconciliation. And due to the wives is similar to what is expected of them, according to what is reasonable. But the men have a degree over them [in responsibility and authority]. And Allah is Exalted in Might and Wise.

And if he has divorced her [for the third time], then she is not lawful to him afterward until [after] she marries a husband other than him. And if the latter husband divorces her [or dies], there is no blame upon the woman and her former husband for returning to each other if they think that they can keep [within] the limits of Allah . These are the limits of Allah , which He makes clear to a people who know.