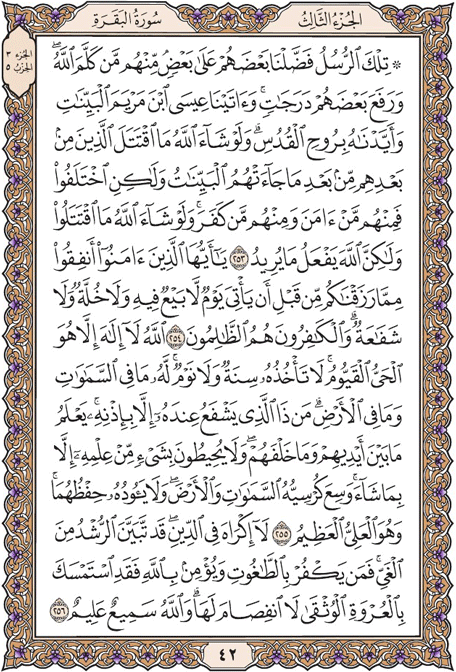 Of all these apostles We have favoured some over the others. God has addressed some of them, and the stations of some have been exalted over the others. And to Jesus, son of Mary, We gave tokens, and reinforced him with divine grace. If God had so willed those who came after them would never have contended when clear signs had come to them. But dissensions arose, some believed, some denied. And if God had willed they would never have fought among themselves. But God does whatsoever He please.

O believers, expend of what We have given you before the day arrives on which there will be no barter, and no friendship or intercession matter, and those who are disbelievers will be sinners.

God: There is no god but He, the living, eternal, self-subsisting, ever sustaining. Neither does somnolence affect Him nor sleep. To Him belongs all that is in the heavens and the earth: and who can intercede with Him except by His leave? Known to Him is all that is present before men and what is hidden (in time past and time future), and not even a little of His knowledge can they grasp except what He will. His seat extends over heavens and the earth, and He tires not protecting them: He alone is all high and supreme.

There is no compulsion in matter of faith. Distinct is the way of guidance now from error. He who turns away from the forces of evil and believes in God, will surely hold fast to a handle that is strong and unbreakable, for God hears all and knows everything.