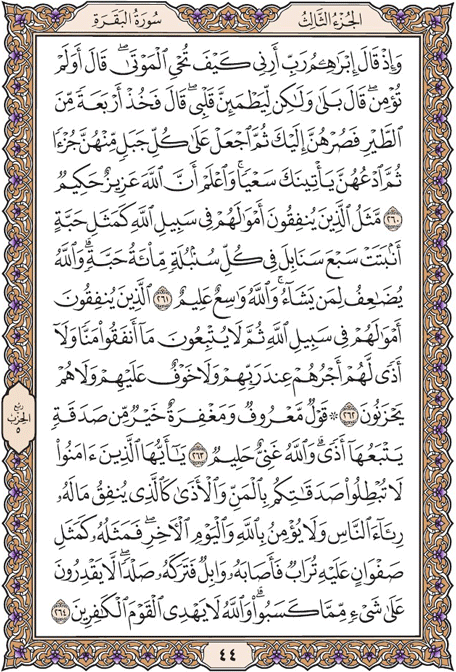 Remember, when Abraham said: "O Lord, show me how you raise the dead," He said: "What! Do you not believe?" "I do," answered Abraham. "I only ask for my heart's assurance." (The Lord) said: "Trap four birds and tame them, then put each of them on a (separate) hill, and call them, and they will come flying to you. Know that God is all-powerful and all-wise."

The semblance of those who expend their wealth in the way of God is that of a grain of corn from which grow seven ears, each ear containing a hundred grains. Truly God increases for whomsoever He will, for God is infinite and all-wise.

Those who spend in the way of God, and having spent do not boast or give pain (by word or deed), will get their reward from their Lord, and will neither have fear nor regret.

Saying a word that is kind, and forgiving is better than charity that hurts. (Do not forget that) God is affluent and kind.

O believers, do not nullify your charity by giving to oblige and flaunting (your favours) like a man who spends of his wealth only to show off, but does not believe in God and the Last Day. His semblance is that of a rock covered with earth which is washed away by rain exposing the hard rock bare. So they gain nothing from their earnings. God does not guide a people who do not believe.