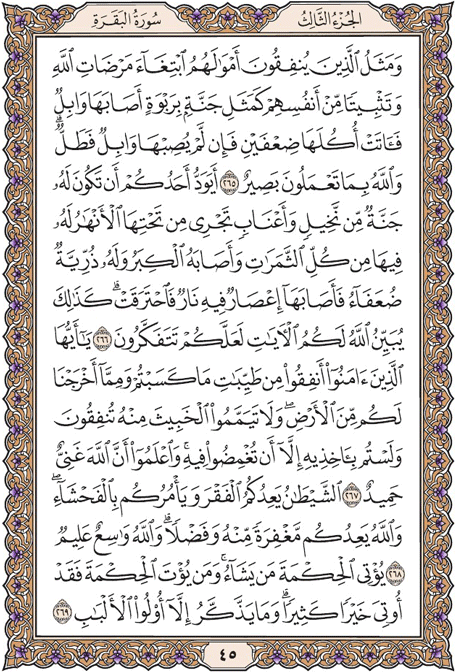 And the example of those who spend their wealth seeking means to the approval of Allah and assuring [reward for] themselves is like a garden on high ground which is hit by a downpour - so it yields its fruits in double. And [even] if it is not hit by a downpour, then a drizzle [is sufficient]. And Allah , of what you do, is Seeing.

Would one of you like to have a garden of palm trees and grapevines underneath which rivers flow in which he has from every fruit? But he is afflicted with old age and has weak offspring, and it is hit by a whirlwind containing fire and is burned. Thus does Allah make clear to you [His] verses that you might give thought.

O you who have believed, spend from the good things which you have earned and from that which We have produced for you from the earth. And do not aim toward the defective therefrom, spending [from that] while you would not take it [yourself] except with closed eyes. And know that Allah is Free of need and Praiseworthy.

Satan threatens you with poverty and orders you to immorality, while Allah promises you forgiveness from Him and bounty. And Allah is all-Encompassing and Knowing.

He gives wisdom to whom He wills, and whoever has been given wisdom has certainly been given much good. And none will remember except those of understanding.