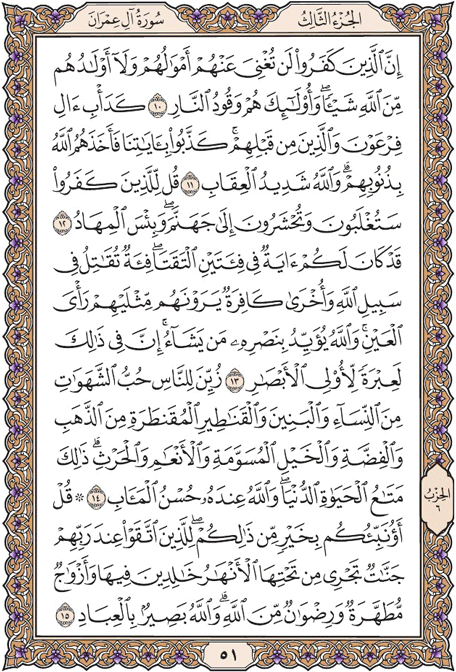 As for those who deny, neither their wealth nor their children will help them in the least against God. They shall be but faggots for (the fire of) Hell,

Like the people of the Pharaoh, and those before them, who rejected Our signs, and were punished for their sins by God; and the punishment of God is severe.

So tell the disbelievers: "You will surely be subdued and driven to Hell: How bad a preparation!"

There was a token for you in the two armies which clashed (in the battle of Badr), one fighting for God, the other of unbelievers who saw with their own eyes the faithful to be two times as many as they, for God reinforces with His help whomsoever He will. In this is a lesson for those who have eyes.

Enamoured are the people of the lust of (earthly) pleasures, of women and of children and hoarded heaps of gold and silver, well-bred horses, and tilled land and cattle, all (vain) goods and chattels of the life of this world, while the best of abodes is with God.

Say: "Shall I tell you of (things) even better? With the Lord are gardens with running streams of water for those who keep from evil and follow the straight path, where they will live unchanged with the purest of companions and blessings of God." And under God's eyes are devotees