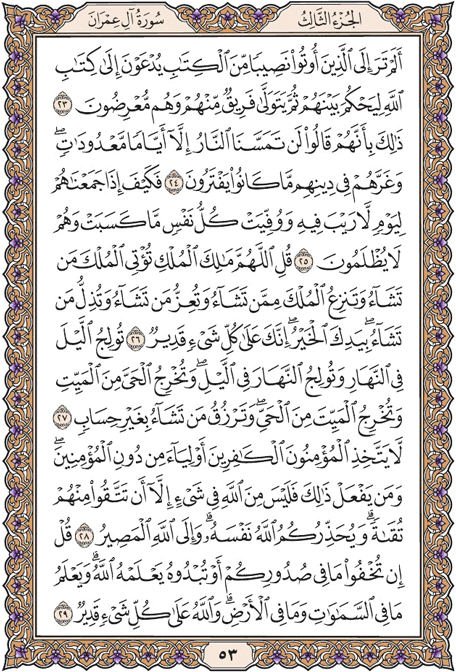 Do you not consider, [O Muúammad], those who were given a portion of the Scripture? They are invited to the Scripture of Allah that it should arbitrate between them; then a party of them turns away, and they are refusing.

That is because they say, |Never will the Fire touch us except for [a few] numbered days,| and [because] they were deluded in their religion by what they were inventing.

So how will it be when We assemble them for a Day about which there is no doubt? And each soul will be compensated [in full for] what it earned, and they will not be wronged.

Let not believers take disbelievers as allies rather than believers. And whoever [of you] does that has nothing with Allah , except when taking precaution against them in prudence. And Allah warns you of Himself, and to Allah is the [final] destination.

Say, |Whether you conceal what is in your breasts or reveal it, Allah knows it. And He knows that which is in the heavens and that which is on the earth. And Allah is over all things competent.