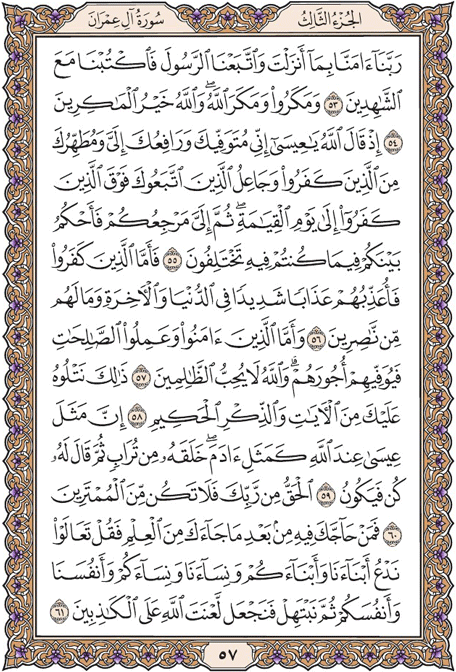 Our Lord, we have believed in what You revealed and have followed the messenger Jesus, so register us among the witnesses [to truth].

And the disbelievers planned, but Allah planned. And Allah is the best of planners.

[Mention] when Allah said, |O Jesus, indeed I will take you and raise you to Myself and purify you from those who disbelieve and make those who follow you [in submission to Allah alone] superior to those who disbelieve until the Day of Resurrection. Then to Me is your return, and I will judge between you concerning that in which you used to differ.

And as for those who disbelieved, I will punish them with a severe punishment in this world and the Hereafter, and they will have no helpers.

But as for those who believed and did righteous deeds, He will give them in full their rewards, and Allah does not like the wrongdoers.

This is what We recite to you, [O Muúammad], of [Our] verses and the precise [and wise] message.

Indeed, the example of Jesus to Allah is like that of Adam. He created Him from dust; then He said to him, |Be,| and he was.

The truth is from your Lord, so do not be among the doubters.

Then whoever argues with you about it after [this] knowledge has come to you - say, |Come, let us call our sons and your sons, our women and your women, ourselves and yourselves, then supplicate earnestly [together] and invoke the curse of Allah upon the liars [among us].