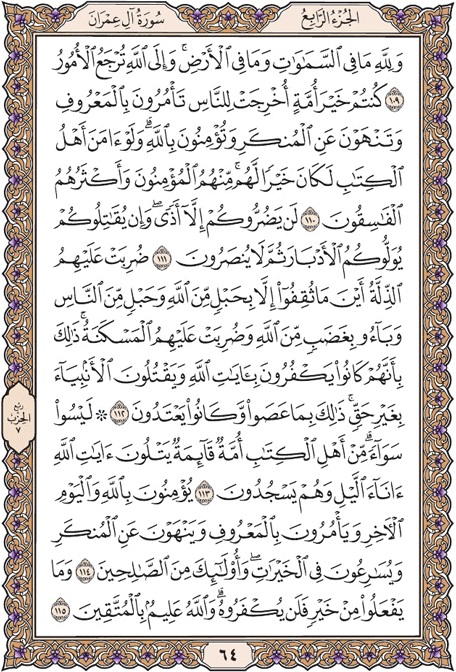 To Allah belongs whatever is in the heavens and whatever is on the earth. And to Allah will [all] matters be returned.

You are the best nation produced [as an example] for mankind. You enjoin what is right and forbid what is wrong and believe in Allah . If only the People of the Scripture had believed, it would have been better for them. Among them are believers, but most of them are defiantly disobedient.

They will not harm you except for [some] annoyance. And if they fight you, they will show you their backs; then they will not be aided.

They are not [all] the same; among the People of the Scripture is a community standing [in obedience], reciting the verses of Allah during periods of the night and prostrating [in prayer].

They believe in Allah and the Last Day, and they enjoin what is right and forbid what is wrong and hasten to good deeds. And those are among the righteous.

And whatever good they do - never will it be removed from them. And Allah is Knowing of the righteous.