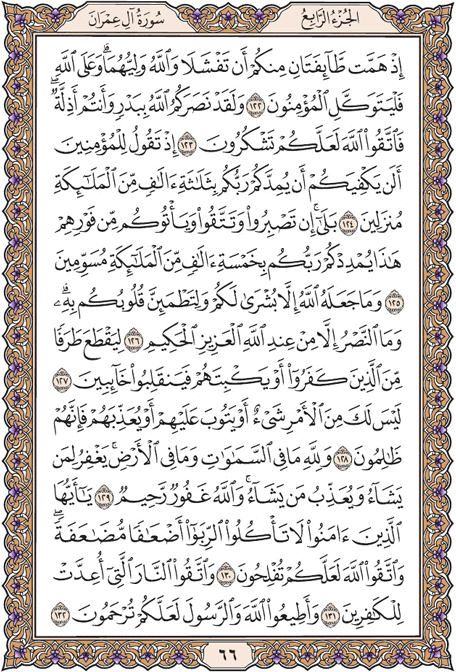 When two parties among you were about to lose courage, but Allah was their ally; and upon Allah the believers should rely.

And already had Allah given you victory at [the battle of] Badr while you were few in number. Then fear Allah ; perhaps you will be grateful.

[Remember] when you said to the believers, |Is it not sufficient for you that your Lord should reinforce you with three thousand angels sent down?

Yes, if you remain patient and conscious of Allah and the enemy come upon you [attacking] in rage, your Lord will reinforce you with five thousand angels having marks [of distinction]

And Allah made it not except as [a sign of] good tidings for you and to reassure your hearts thereby. And victory is not except from Allah , the Exalted in Might, the Wise -

That He might cut down a section of the disbelievers or suppress them so that they turn back disappointed.

Not for you, [O Muúammad, but for Allah ], is the decision whether He should [cut them down] or forgive them or punish them, for indeed, they are wrongdoers.

O you who have believed, do not consume usury, doubled and multiplied, but fear Allah that you may be successful.

And fear the Fire, which has been prepared for the disbelievers.

And obey Allah and the Messenger that you may obtain mercy.