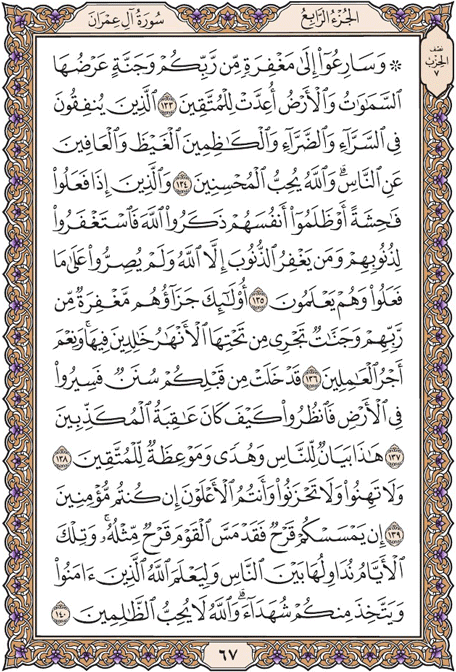 And hasten to forgiveness from your Lord and a garden as wide as the heavens and earth, prepared for the righteous

Who spend [in the cause of Allah ] during ease and hardship and who restrain anger and who pardon the people - and Allah loves the doers of good;

And those who, when they commit an immorality or wrong themselves [by transgression], remember Allah and seek forgiveness for their sins - and who can forgive sins except Allah ? - and [who] do not persist in what they have done while they know.

Those - their reward is forgiveness from their Lord and gardens beneath which rivers flow [in Paradise], wherein they will abide eternally; and excellent is the reward of the [righteous] workers.

Similar situations [as yours] have passed on before you, so proceed throughout the earth and observe how was the end of those who denied.

This [Qur'an] is a clear statement to [all] the people and a guidance and instruction for those conscious of Allah .

So do not weaken and do not grieve, and you will be superior if you are [true] believers.

If a wound should touch you - there has already touched the [opposing] people a wound similar to it. And these days [of varying conditions] We alternate among the people so that Allah may make evident those who believe and [may] take to Himself from among you martyrs - and Allah does not like the wrongdoers -