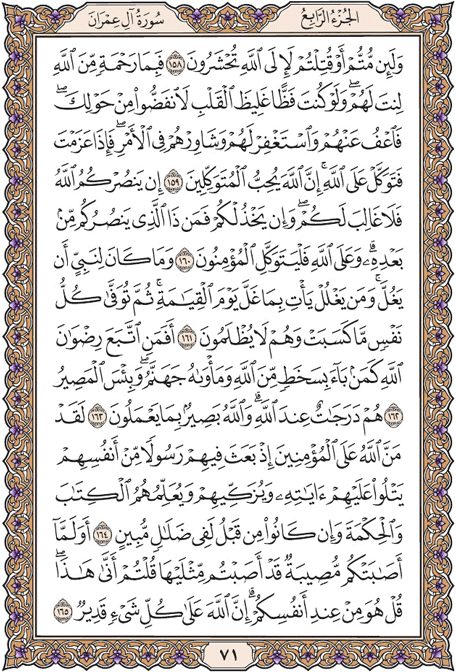 And whether you die or are killed, unto Allah you will be gathered.

So by mercy from Allah , [O Muúammad], you were lenient with them. And if you had been rude [in speech] and harsh in heart, they would have disbanded from about you. So pardon them and ask forgiveness for them and consult them in the matter. And when you have decided, then rely upon Allah . Indeed, Allah loves those who rely [upon Him].

If Allah should aid you, no one can overcome you; but if He should forsake you, who is there that can aid you after Him? And upon Allah let the believers rely.

It is not [attributable] to any prophet that he would act unfaithfully [in regard to war booty]. And whoever betrays, [taking unlawfully], will come with what he took on the Day of Resurrection. Then will every soul be [fully] compensated for what it earned, and they will not be wronged.

So is one who pursues the pleasure of Allah like one who brings upon himself the anger of Allah and whose refuge is Hell? And wretched is the destination.

They are [varying] degrees in the sight of Allah , and Allah is Seeing of whatever they do.

Certainly did Allah confer [great] favor upon the believers when He sent among them a Messenger from themselves, reciting to them His verses and purifying them and teaching them the Book and wisdom, although they had been before in manifest error.

Why [is it that] when a [single] disaster struck you [on the day of Uúud], although you had struck [the enemy in the battle of Badr] with one twice as great, you said, |From where is this?| Say, |It is from yourselves.| Indeed, Allah is over all things competent.