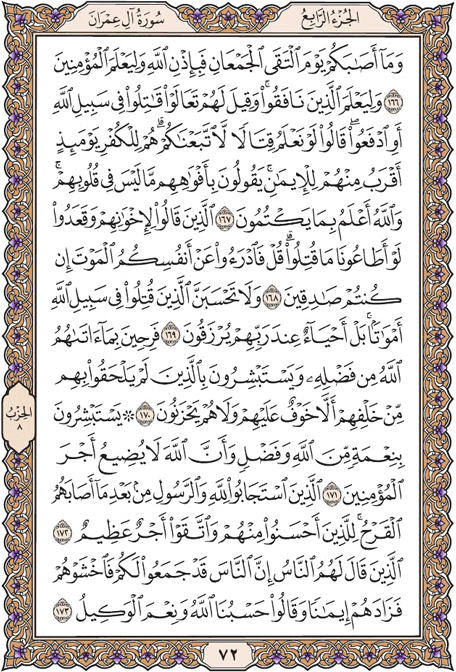 What you suffered on the day the two armies had met was by God's dispensation, so that He may distinguish the faithful,

And may distinguish the hypocrites who were told: "Fight in the way of God, or defend yourselves," and who had replied: "If we knew of the fight we would have followed you." They were nearer unbelief than faith on that day, and they said with their tongues what was not in their hearts; but God is aware of what they hide.

To those who sit at home and say of their brothers: "They would never have been killed had they listened to us, say: "Drive away death from your midst if what you say is true."

Never think that those who are killed in the way of God are dead. They are alive, getting succour from their Lord,

Rejoicing at what God has given them of His grace, and happy for those who are trying to overtake them but have not joined them yet, and who will have no fear or regret.

They rejoice at the kindness and mercy of God; and God does not suffer the wages of the faithful to go waste.

Those who obeyed the call of God and His Messenger, even after they were wounded, and took heed for themselves, shall indeed have an ample reward,

Those who were told: "They have gathered an army, beware," and their faith increased and they said: "God is sufficient for us, and the best of protectors,"