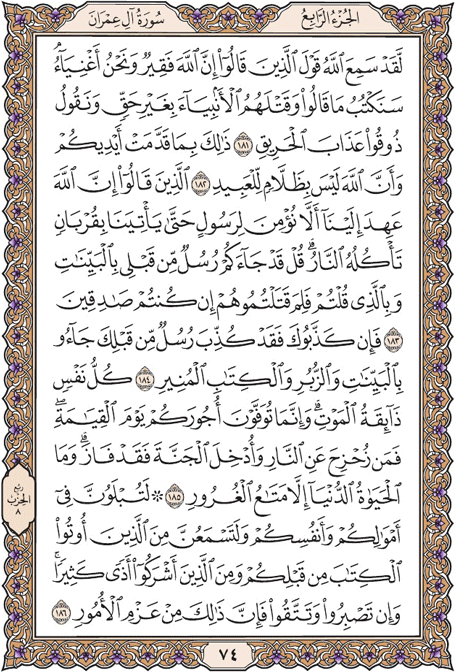 Allah has certainly heard the statement of those [Jews] who said, |Indeed, Allah is poor, while we are rich.| We will record what they said and their killing of the prophets without right and will say, |Taste the punishment of the Burning Fire.

That is for what your hands have put forth and because Allah is not ever unjust to [His] servants.

[They are] those who said, |Indeed, Allah has taken our promise not to believe any messenger until he brings us an offering which fire [from heaven] will consume.| Say, |There have already come to you messengers before me with clear proofs and [even] that of which you speak. So why did you kill them, if you should be truthful?|

Then if they deny you, [O Muúammad] - so were messengers denied before you, who brought clear proofs and written ordinances and the enlightening Scripture.

Every soul will taste death, and you will only be given your [full] compensation on the Day of Resurrection. So he who is drawn away from the Fire and admitted to Paradise has attained [his desire]. And what is the life of this world except the enjoyment of delusion.

You will surely be tested in your possessions and in yourselves. And you will surely hear from those who were given the Scripture before you and from those who associate others with Allah much abuse. But if you are patient and fear Allah - indeed, that is of the matters [worthy] of determination.