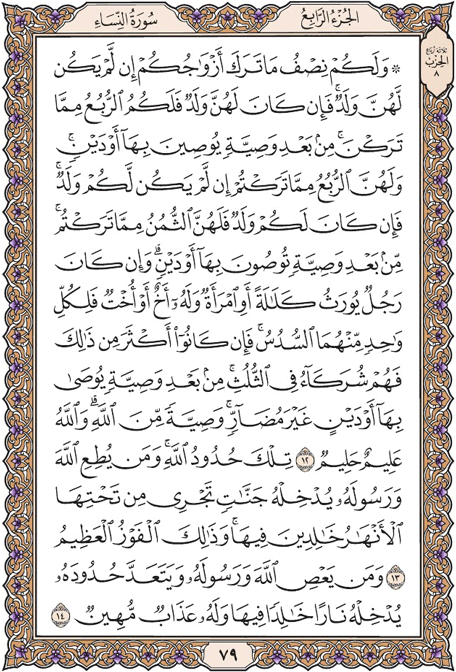 And for you is half of what your wives leave if they have no child. But if they have a child, for you is one fourth of what they leave, after any bequest they [may have] made or debt. And for the wives is one fourth if you leave no child. But if you leave a child, then for them is an eighth of what you leave, after any bequest you [may have] made or debt. And if a man or woman leaves neither ascendants nor descendants but has a brother or a sister, then for each one of them is a sixth. But if they are more than two, they share a third, after any bequest which was made or debt, as long as there is no detriment [caused]. [This is] an ordinance from Allah , and Allah is Knowing and Forbearing.

These are the limits [set by] Allah , and whoever obeys Allah and His Messenger will be admitted by Him to gardens [in Paradise] under which rivers flow, abiding eternally therein; and that is the great attainment.

And whoever disobeys Allah and His Messenger and transgresses His limits - He will put him into the Fire to abide eternally therein, and he will have a humiliating punishment.