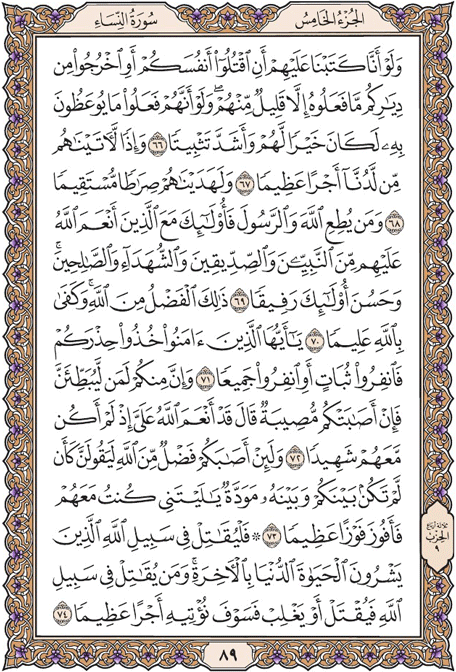 And if We had decreed upon them, |Kill yourselves| or |Leave your homes,| they would not have done it, except for a few of them. But if they had done what they were instructed, it would have been better for them and a firmer position [for them in faith].

And then We would have given them from Us a great reward.

And We would have guided them to a straight path.

And whoever obeys Allah and the Messenger - those will be with the ones upon whom Allah has bestowed favor of the prophets, the steadfast affirmers of truth, the martyrs and the righteous. And excellent are those as companions.

That is the bounty from Allah , and sufficient is Allah as Knower.

O you who have believed, take your precaution and [either] go forth in companies or go forth all together.

And indeed, there is among you he who lingers behind; and if disaster strikes you, he says, | Allah has favored me in that I was not present with them.

But if bounty comes to you from Allah , he will surely say, as if there had never been between you and him any affection. |Oh, I wish I had been with them so I could have attained a great attainment.