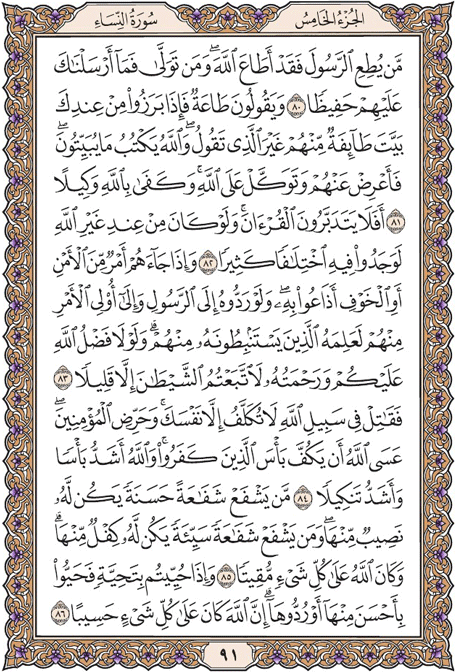 He who obeys the Messenger has obeyed Allah ; but those who turn away - We have not sent you over them as a guardian.

And they say, |[We pledge] obedience.| But when they leave you, a group of them spend the night determining to do other than what you say. But Allah records what they plan by night. So leave them alone and rely upon Allah . And sufficient is Allah as Disposer of affairs.

Then do they not reflect upon the Qur'an? If it had been from [any] other than Allah , they would have found within it much contradiction.

And when there comes to them information about [public] security or fear, they spread it around. But if they had referred it back to the Messenger or to those of authority among them, then the ones who [can] draw correct conclusions from it would have known about it. And if not for the favor of Allah upon you and His mercy, you would have followed Satan, except for a few.

So fight, [O Muúammad], in the cause of Allah ; you are not held responsible except for yourself. And encourage the believers [to join you] that perhaps Allah will restrain the [military] might of those who disbelieve. And Allah is greater in might and stronger in [exemplary] punishment.

And when you are greeted with a greeting, greet [in return] with one better than it or [at least] return it [in a like manner]. Indeed, Allah is ever, over all things, an Accountant.