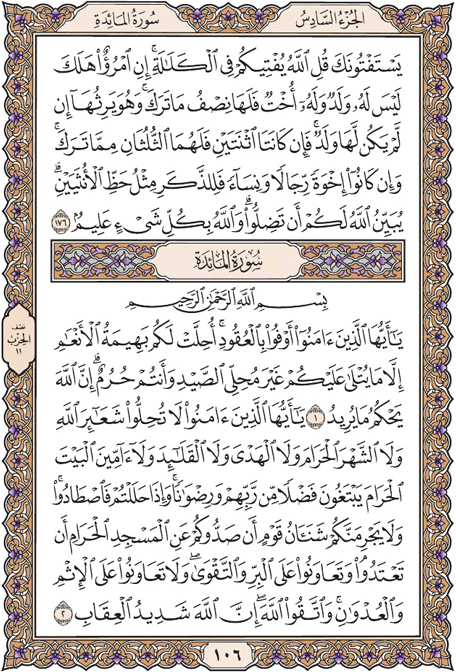 They ask you for judgement about 'Kalalah' (a man who dies childless). Say: "God has given a decision in the matter of inheritance." If a man dies and leaves no child behind but have a sister, she will get a half of what he owned, as he would have done the whole of what she possessed if she had died a childless person. In ease he has two sisters then they will get two-thirds of the heritage. But if he has both brothers and sisters, the male will inherit a share equal to that of two females. God makes this manifest to you lest you wander astray, for God has knowledge of everything.

O YOU WHO believe, fulfil your obligations. Made lawful (as food) for you are animals except those mentioned (here); but unlawful during Pilgrimage is game. God ordains whatsoever He wills.

O you who believe, do not violate the (sanctity of) offerings to God, nor the rites of the holy month, nor sacrificial cattle with garlands (that are brought to the Ka'bah), nor of the people who flock to the Holy House seeking the bounties of their Lord, and His pleasure. Hunt when you have laid aside the robe of the pilgrim. And do not let your hatred of a people who had barred you from the Holy Mosque lead you to aggression. But help one another in goodness and piety, and do not assist in crime and rebellion, and fear God. Surely God is severe in punishment.