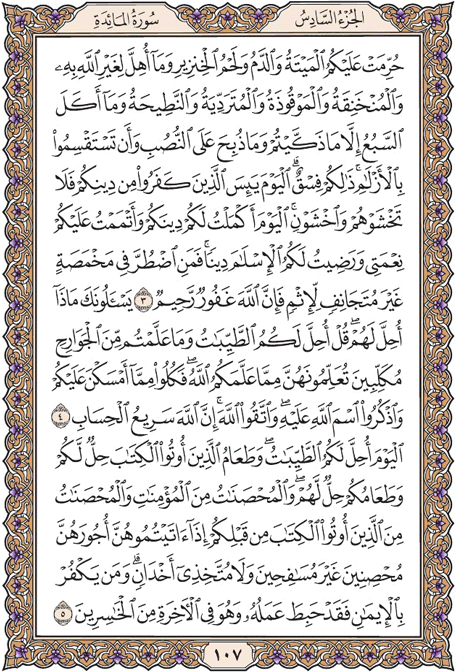 Forbidden you is carrion and blood, and the flesh of the swine, and whatsoever has been killed in the name of some other than God, and whatever has been strangled, or killed by a blow or a fall, or by goring, or that which has been mauled by wild beasts unless slaughtered while still alive; and that which has been slaughtered at altars is forbidden, and also dividing the meat by casting lots with arrows. All this is sinful. Today the unbelievers have lost every hope of (despoiling) your creed; so do not fear them, fear Me. Today I have perfected your system of belief and bestowed My favours upon you in full, and have chosen submission (al-Islam) as the creed for you. If one of you is driven by hunger (to eat the forbidden) without the evil intent of sinning, then God is forgiving and kind.

They ask you what is lawful for them. Say: "All things are lawful for you that are clean, and what the trained hunting animals take for you as you have trained then, in the light of God's teachings, but read over them the name of God, and fear (straying from the path of) God, for God is swift in the reckoning."