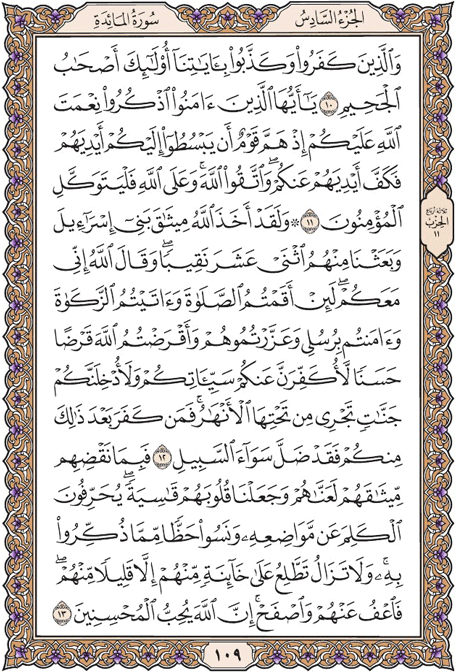 But those who disbelieve and deny Our signs - those are the companions of Hellfire.

O you who have believed, remember the favor of Allah upon you when a people determined to extend their hands [in aggression] against you, but He withheld their hands from you; and fear Allah . And upon Allah let the believers rely.

And Allah had already taken a covenant from the Children of Israel, and We delegated from among them twelve leaders. And Allah said, |I am with you. If you establish prayer and give zakah and believe in My messengers and support them and loan Allah a goodly loan, I will surely remove from you your misdeeds and admit you to gardens beneath which rivers flow. But whoever of you disbelieves after that has certainly strayed from the soundness of the way.

So for their breaking of the covenant We cursed them and made their hearts hard. They distort words from their [proper] usages and have forgotten a portion of that of which they were reminded. And you will still observe deceit among them, except a few of them. But pardon them and overlook [their misdeeds]. Indeed, Allah loves the doers of good.