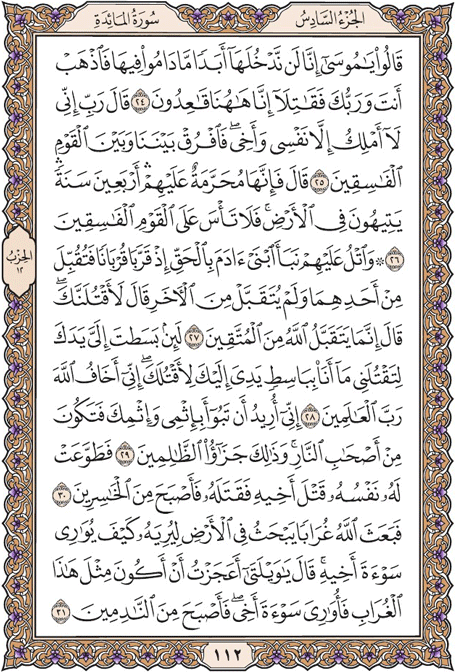 They said: "O Moses, we shall never, never enter so long as they are there. Go you and your Lord to fight them; we stay here."

Said (Moses): "O Lord, I have control over none but myself and my brother; so distinguish between us and these, the wicked people."

(And God) said: "Then verily this land is forbidden them for forty years, and they shall wander perplexed over the earth. So do not grieve for these, the wicked people."

Narrate to them exactly the tale of the two sons of Adam. When each of them offered a sacrifice (to God), that of one was accepted, and that of the other was not. Said (the one): "I will murder you," and the other replied: "God only accepts from those who are upright and preserve themselves from evil.

If you raise your hand to kill me, I will raise not mine to kill you, for I fear God, the Lord of all the worlds;

I would rather you suffered the punishment for sinning against me, and for your own sin, and became an inmate of Hell. And that is the requital for the unjust."

Then the other was induced by his passion to murder his brother, and he killed him, and became one of the damned.