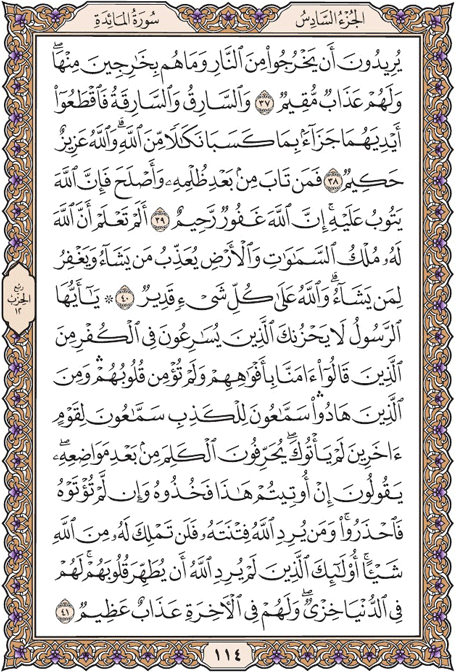 They would like to escape from the Fire, but will never succeed, and their suffering will be constant

As for the thief, whether man or woman, cut his hand as punishment from God for what he had done; and God is all mighty and all wise.

But those who repent after a crime and reform, shall be forgiven by God, for God is forgiving and kind.

Do you not know that God's is the kingdom of the heavens and the earth? He punishes whom He will, and pardons whom He please, for God has the power over all things.

Be not grieved, O Apostle, by those who hasten to outrace others in denial, and say with their tongues: "We believe," but do not believe in their hearts. And those of the Jews who listen to tell lies, and spy on behalf of others who do not come to you, and who distort the words (of the Torah) out of context, and say: "If you are given (what we say is true) accept it; but if you are not given it, beware." You cannot intercede with God for him whom God would not show the way. These are the people whose hearts God does not wish to purify. For them is ignominy in this world and punishment untold in the next --