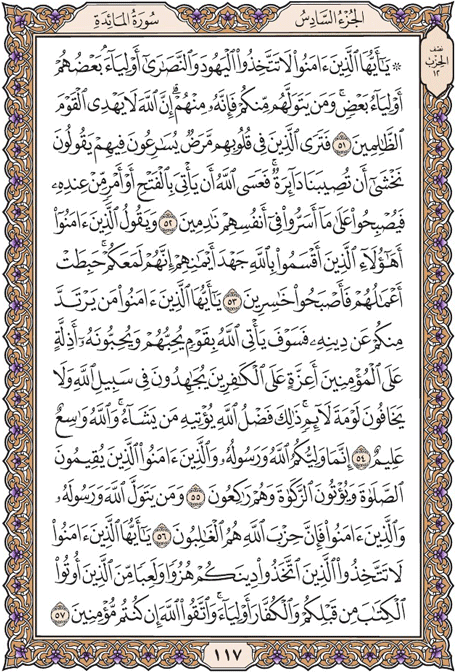 O believers, do not hold Jews and Christians as your allies. They are allies of one another; and anyone who makes them his friends is surely one of them; and God does not guide the unjust.

You will notice that those whose hearts are afflicted with sickness (of doubt) only hasten to join them and say: "We fear lest misfortune should surround us." It may well be that God may soon send (you) success, or other command of His. Then will they be repentant of what they had concealed in their hearts.

Then the believers will say: "Are these the people who had sworn by God on solemn oath and said: "We are surely with you?" Wasted have been all their deeds, and losers they remain.

O believers, any one of you who turns back on his faith (should remember) that God could verily bring (in your place) another people whom He would love as they would love Him, gentle with believers, unbending with infidels, who would strive in the way of God, unafraid of blame by any slanderer. Such is the favour of God which He bestows on whomsoever He will. God is infinite and all-knowing.

Your only friends are God and His Messenger, and those who believe and are steadfast in devotion, who pay the zakat and bow in homage (before God).

And those who take God and His Prophet and the faithful as their friends are indeed men of God, who will surely be victorious.

O believers, do not make friends with those who mock and make a sport of your faith, who were given the Book before you, and with unbelievers; and fear God if you truly believe;