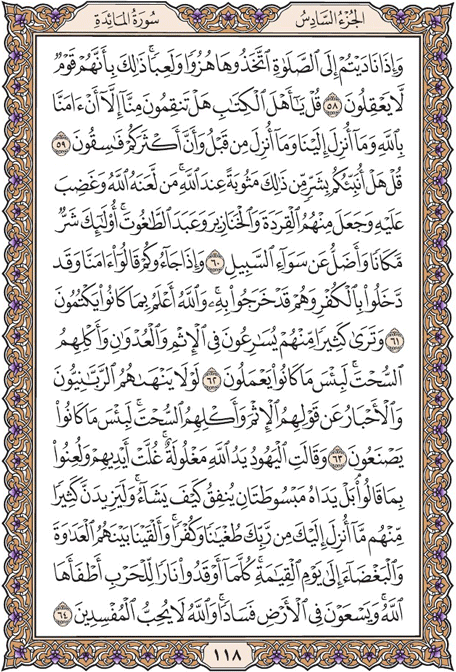 (Nor make friends with) those who, when you call (the faithful) to prayer, make mock of it and jest, because they do not understand.

Say to them: "O people of the Book, what reason have you for disliking us other than that we believe in God and what has been sent down to us, and was sent down before, and because most of you are disobedient?"

Say: "Shall I inform you who will receive the worst chastisement from God? They who were condemned by God, and on whom fell His wrath, and those who were turned to apes and swine, and those who worship the powers of evil. They are in the worse gradation, and farthest away from the right path."

When they come to you they say: "We believe;" but unbelieving they came and unbelieving go; and God is aware of what they conceal in their hearts.

You will see among them many who rush into sin and wickedness, and devour unlawful gain. How evil are the things they do!

Why do not their rabbis and priests prohibit them from talking of sinful things and from devouring unlawful gain? Evil are the acts they commit!

The Jews say: "Bound are the hands of God." Tied be their own hands, and damned may they be for saying what they say! In fact, both His hands are open wide: He spends of His bounty in any way He please. But what your Lord has revealed to you will only increase their rebellion and unbelief. So We have caused enmity and hatred among them (which will last) till the Day of Resurrection. As often as they ignite the fires of war they are extinguished by God. Yet they rush around to spread corruption in the land; but God does not love those who are corrupt.