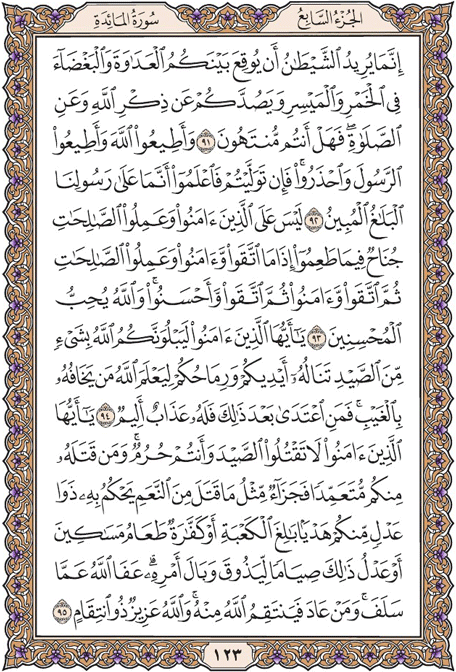 Satan only wants to cause between you animosity and hatred through intoxicants and gambling and to avert you from the remembrance of Allah and from prayer. So will you not desist?

And obey Allah and obey the Messenger and beware. And if you turn away - then know that upon Our Messenger is only [the responsibility for] clear notification.

O you who have believed, Allah will surely test you through something of the game that your hands and spears [can] reach, that Allah may make evident those who fear Him unseen. And whoever transgresses after that - for him is a painful punishment.

O you who have believed, do not kill game while you are in the state of iúram. And whoever of you kills it intentionally - the penalty is an equivalent from sacrificial animals to what he killed, as judged by two just men among you as an offering [to Allah ] delivered to the Ka'bah, or an expiation: the feeding of needy people or the equivalent of that in fasting, that he may taste the consequence of his deed. Allah has pardoned what is past; but whoever returns [to violation], then Allah will take retribution from him. And Allah is Exalted in Might and Owner of Retribution.