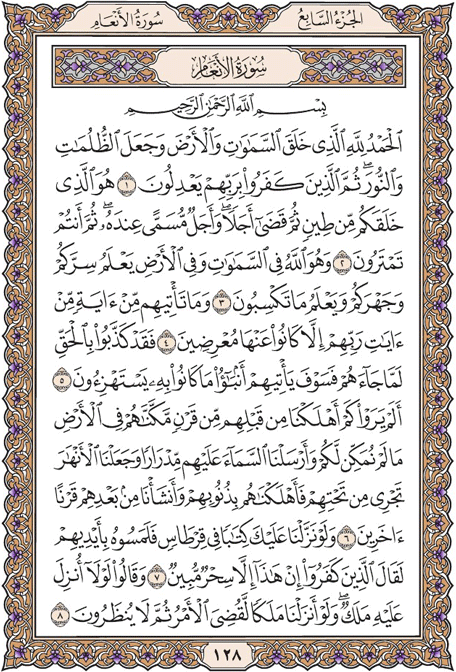 [All] praise is [due] to Allah , who created the heavens and the earth and made the darkness and the light. Then those who disbelieve equate [others] with their Lord.

It is He who created you from clay and then decreed a term and a specified time [known] to Him; then [still] you are in dispute.

And He is Allah , [the only deity] in the heavens and the earth. He knows your secret and what you make public, and He knows that which you earn.

And no sign comes to them from the signs of their Lord except that they turn away therefrom.

For they had denied the truth when it came to them, but there is going to reach them the news of what they used to ridicule.

Have they not seen how many generations We destroyed before them which We had established upon the earth as We have not established you? And We sent [rain from] the sky upon them in showers and made rivers flow beneath them; then We destroyed them for their sins and brought forth after them a generation of others.

And even if We had sent down to you, [O Muúammad], a written scripture on a page and they touched it with their hands, the disbelievers would say, |This is not but obvious magic.

And they say, |Why was there not sent down to him an angel?| But if We had sent down an angel, the matter would have been decided; then they would not be reprieved.