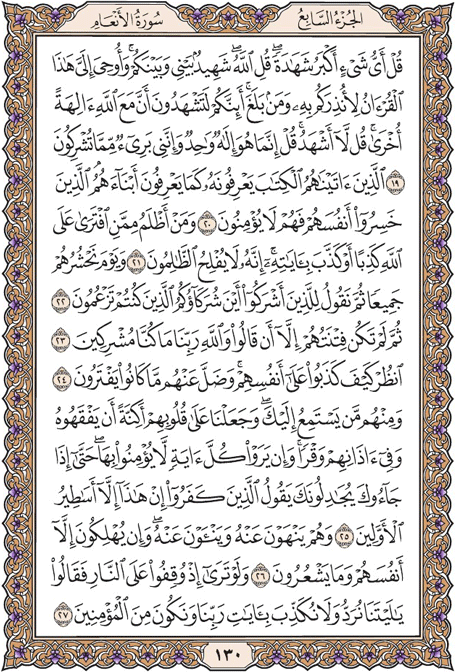 Ask: "Of all things what is most vital as evidence?" Say: "God (who) is witness between you and me that this Qur'an has been revealed to me that I may warn you on its strength, and those whom it reaches. Do you really bear witness there are other gods with God?" Tell them: "I bear no such Witness." Say: "Verily He is the only God, and I am clear of what you associate (with Him)."

Those to whom We have given the Book know it distinctly as they know their sons; but those who are lost of soul do not believe.

And who is more wicked than he who invents lies about God or denies His revelations? Surely the wicked will not succeed.

The day We shall gather all of them together and say to those who ascribe (partners to God): "Where are the compeers who you claimed (were equal to God)?"

Then their excuse will be but to say: "By God our Lord, we were not idolaters."

You will see how they will lie against themselves, and all their slanderings will be vain.

There are some among them who listen to you; but We have put a covering on their hearts so that they fail to understand it, and a deafness appears in their ears. Even if they saw all the signs they would not believe in them; and even when they come to you to dispute with you, the unbelievers say: "This is nothing but fables of antiquity."

And they forbid others from (believing in) it, and themselves keep away from it. But they ruin none but themselves, and do not understand.

If you should see them when they are stood before the Fire, they will say: "Ah would that we were sent back (to the world)! We shall not deny the signs of our Lord, and be among those who believe."