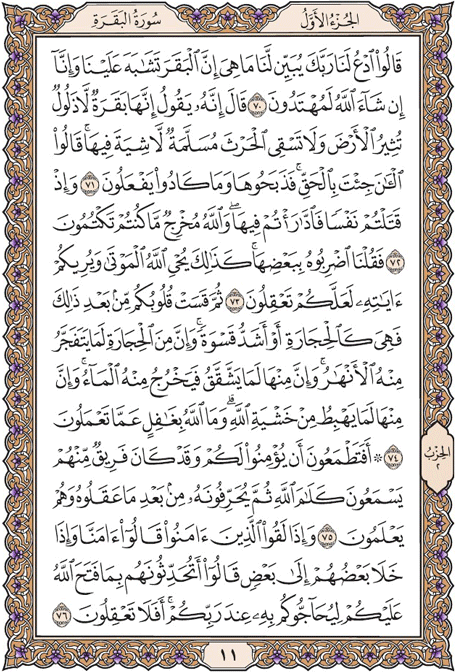 "Call on your Lord," they said, "to name its variety, as cows be all alike to us. If God wills we shall be guided aright."

And Moses said: "He says it's a cow unyoked, nor worn out by ploughing or watering the fields, one in good shape with no mark or blemish." "Now have you brought us the truth," they said; and then, after wavering, they sacrificed the cow.

Remember when you killed a man and blamed each other for the deed, God brought to light what you concealed.

We had pronounced already: "Slay (the murderer) for (taking a life)." Thus God preserves life from death and shows you His signs that you may understand.

Yet, in spite of this, your hearts only hardened like rocks or even harder, but among rocks are those from which rivers flow; and there are also those which split open and water gushes forth; as well as those that roll down for fear of God. And God is not negligent of all that you do.

How do you expect them to put their faith in you, when you know that some among them heard the word of God and, having understood, perverted it knowingly?

For when they meet the faithful, they say: "We believe;" but when among themselves, they say: "Why do you tell them what the Lord has revealed to you? They will only dispute it in the presence of your Lord. Have you no sense indeed?"