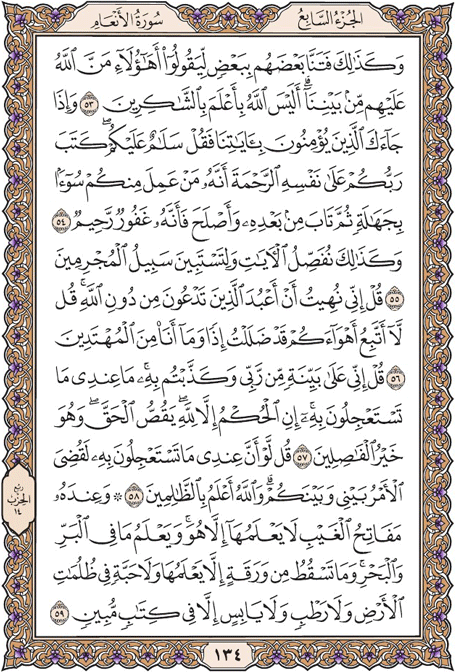 And thus We have tried some of them through others that the disbelievers might say, |Is it these whom Allah has favored among us?| Is not Allah most knowing of those who are grateful?

And when those come to you who believe in Our verses, say, |Peace be upon you. Your Lord has decreed upon Himself mercy: that any of you who does wrong out of ignorance and then repents after that and corrects himself - indeed, He is Forgiving and Merciful.

And thus do We detail the verses, and [thus] the way of the criminals will become evident.

Say, |Indeed, I have been forbidden to worship those you invoke besides Allah .| Say, |I will not follow your desires, for I would then have gone astray, and I would not be of the [rightly] guided.

Say, |Indeed, I am on clear evidence from my Lord, and you have denied it. I do not have that for which you are impatient. The decision is only for Allah . He relates the truth, and He is the best of deciders.

Say, |If I had that for which you are impatient, the matter would have been decided between me and you, but Allah is most knowing of the wrongdoers.

And with Him are the keys of the unseen; none knows them except Him. And He knows what is on the land and in the sea. Not a leaf falls but that He knows it. And no grain is there within the darknesses of the earth and no moist or dry [thing] but that it is [written] in a clear record.