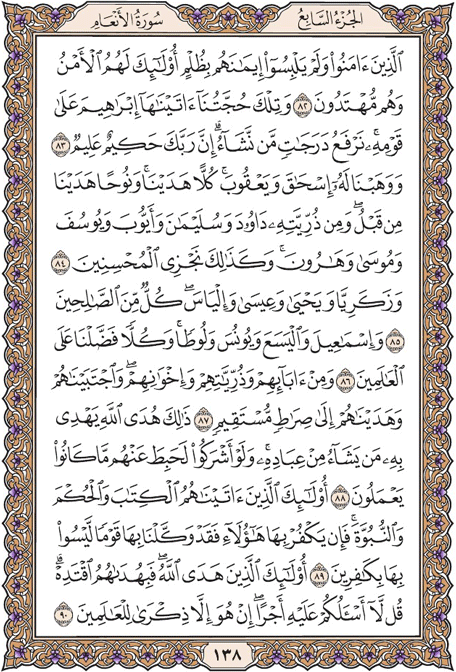 They alone have peace who believe and do not intermix belief with denial, and are guided on the right path."

This is the argument We gave to Abraham against his people. We exalt whosoever We please in rank by degrees. Your Lord is wise and all-knowing.

And We gave him Isaac and Jacob and guided them, as We had guided Noah before them, and of his descendants, David and Solomon and Job and Joseph and Moses and Aaron. Thus We reward those who are upright and do good.

Zachariah and John We guided, and guided Jesus and Elias who were all among the upright.

We gave guidance to Ishmael, Elisha and Jonah and Lot; And We favoured them over the other people of the world,

As We did some of their fathers and progeny and brethren, and chose them, and showed them the right path.

This is God's guidance: He gives among His creatures whom He will. If they had associated others with Him, surely vain would have been all they did.

Those were the people to whom We gave the Book and the Law and the Prophethood. But if they reject these things We shall entrust them to a people who will not deny.

Those were the people who were guided by God; so follow their way. Say: "I ask no recompense of you for this. It is but a reminder for all the people of the world."