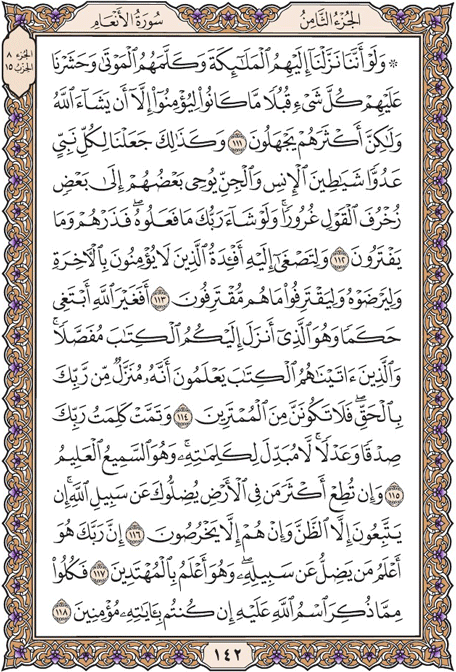 And even if We had sent down to them the angels [with the message] and the dead spoke to them [of it] and We gathered together every [created] thing in front of them, they would not believe unless Allah should will. But most of them, [of that], are ignorant.

And thus We have made for every prophet an enemy - devils from mankind and jinn, inspiring to one another decorative speech in delusion. But if your Lord had willed, they would not have done it, so leave them and that which they invent.

[Say], |Then is it other than Allah I should seek as judge while it is He who has revealed to you the Book explained in detail?| And those to whom We [previously] gave the Scripture know that it is sent down from your Lord in truth, so never be among the doubters.

And the word of your Lord has been fulfilled in truth and in justice. None can alter His words, and He is the Hearing, the Knowing.

And if you obey most of those upon the earth, they will mislead you from the way of Allah . They follow not except assumption, and they are not but falsifying.

So eat of that [meat] upon which the name of Allah has been mentioned, if you are believers in His verses.