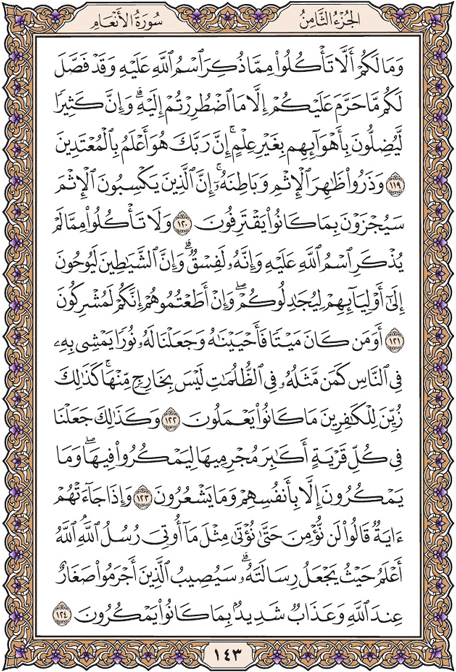 And why should you not eat of that upon which the name of Allah has been mentioned while He has explained in detail to you what He has forbidden you, excepting that to which you are compelled. And indeed do many lead [others] astray through their [own] inclinations without knowledge. Indeed, your Lord - He is most knowing of the transgressors.

And leave what is apparent of sin and what is concealed thereof. Indeed, those who earn [blame for] sin will be recompensed for that which they used to commit.

And do not eat of that upon which the name of Allah has not been mentioned, for indeed, it is grave disobedience. And indeed do the devils inspire their allies [among men] to dispute with you. And if you were to obey them, indeed, you would be associators [of others with Him].

And is one who was dead and We gave him life and made for him light by which to walk among the people like one who is in darkness, never to emerge therefrom? Thus it has been made pleasing to the disbelievers that which they were doing.

And thus We have placed within every city the greatest of its criminals to conspire therein. But they conspire not except against themselves, and they perceive [it] not.

And when a sign comes to them, they say, |Never will we believe until we are given like that which was given to the messengers of Allah .| Allah is most knowing of where He places His message. There will afflict those who committed crimes debasement before Allah and severe punishment for what they used to conspire.