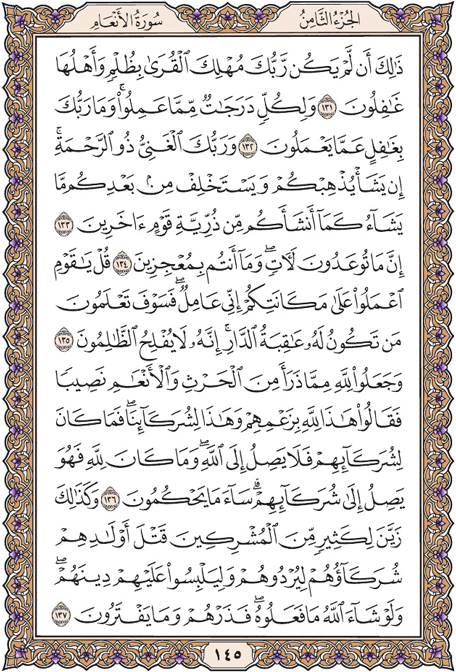 And this (so that it may be clear) that your Lord does not destroy towns and cities arbitrarily while the citizens remain unaware.

Every one has his place according to his deeds, for your Lord is not negligent of what you do.

Your Lord is all-sufficient and full of benevolence. He can take you away if He please, and make whom He will succeed you, as He had raised you from the progeny of others.

The promise that was made to you is bound to be fulfilled. It is not in your power to defeat it.

Tell them: "O my people, go on acting on your part, I am acting on mine. You will soon know whose is the guerdon of life to come." The wicked will not succeed.

They allocate a share from God's own created fields and cattle to God, and they say: "This is God's" -- or so they think -- "and that, of the compeers of God," so that what belongs to the compeers does not reach God, but that which is God's may reach the compeers (set up by them). How bad is the judgement that they make!

In the same way have their companions shown many unbelievers the killing of their children as desirable in order to ruin them and falsify their faith. If God had so willed they would never have done so. Leave them to their falsehoods.