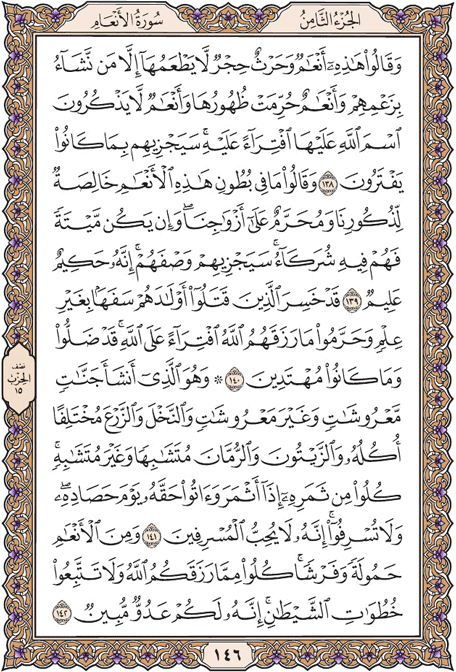 They also say: "These cattle and these crops are consecrated. None may eat of them other than those we permit," -- so they assert. "And the use of these cattle is forbidden for carrying burden." They do not pronounce the name of God on certain animals, inventing lies against Him. He will punish them for what they fabricate.

And they say: "Whatever is in the wombs of these cattle is only meant for men and forbidden our women; but in case it should be still-born both could eat it." God will punish them for what they assert. He is all-wise and all-knowing.

They will surely perish who kill their offspring in ignorance foolhardily, and forbid the food that God has given them by fabricating lies against God. Misguided are they surely, and will never come to guidance.

It is He who grew the gardens, trellised and bowered, and palm trees and land sown with corn and many other seeds, and olives and pomegranates, alike and yet unlike. So eat of their fruit when they are in fruit, and give on the day of harvesting His due, and do not be extravagant, for God does not love those who are prodigal.

He has created beasts of burden and cattle for slaughter. So eat of what God has given you for food, and do not walk in the footsteps of Satan who is surely your declared enemy.