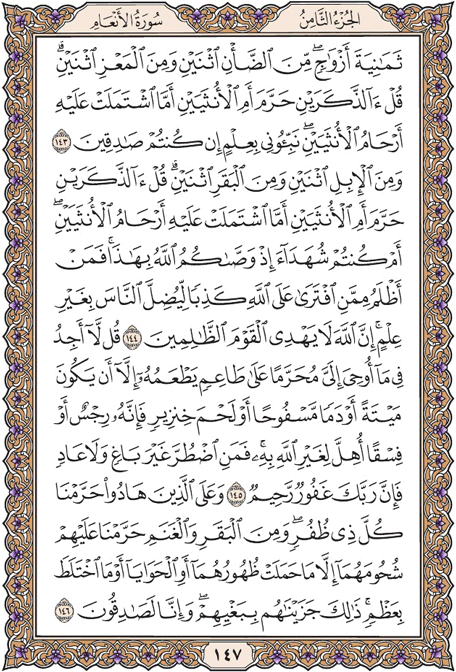 There are eight pairs, two of the species of sheep and two of goats. Ask them which has He forbidden, the two males or the two females, or what the females carry in their wombs? Produce the sanction if you are truthful.

And there are two of camels and two of oxen. Ask them: "Which has He forbidden, the two males or the two females, or what the females carry in their wombs?" Were you present at the time God issued this command?" Who then could be more wicked than he who fabricates a lie and ascribes it to God to mislead men, without any knowledge? God does not guide the miscreants.

You tell them: "In all the commands revealed to me I find nothing which men have been forbidden to eat except carrion and running blood and flesh of the swine for it is unclean, or meat consecrated in the name of some other than God, which is profane. But if one is constrained to eat of these without craving or reverting to it, then surely your Lord is forgiving and kind."

We made unlawful for the Jews all animals with claws or nails, and the fat of the oxen and sheep, except that on their backs or their intestines, or which remains attached to their bones. This was the punishment for their insubordination; and what We say is true.