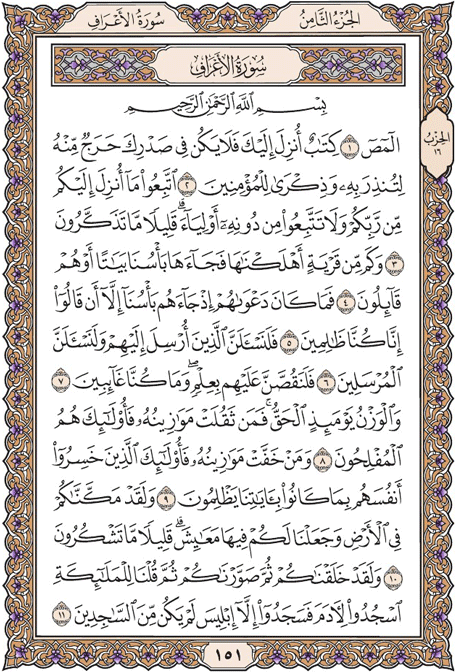 [This is] a Book revealed to you, [O Muúammad] - so let there not be in your breast distress therefrom - that you may warn thereby and as a reminder to the believers.

Follow, [O mankind], what has been revealed to you from your Lord and do not follow other than Him any allies. Little do you remember.

And how many cities have We destroyed, and Our punishment came to them at night or while they were sleeping at noon.

And their declaration when Our punishment came to them was only that they said, |Indeed, we were wrongdoers!|

Then We will surely relate [their deeds] to them with knowledge, and We were not [at all] absent.

And the weighing [of deeds] that Day will be the truth. So those whose scales are heavy - it is they who will be the successful.

And those whose scales are light - they are the ones who will lose themselves for what injustice they were doing toward Our verses.

And We have certainly established you upon the earth and made for you therein ways of livelihood. Little are you grateful.

And We have certainly created you, [O Mankind], and given you [human] form. Then We said to the angels, |Prostrate to Adam|; so they prostrated, except for Iblees. He was not of those who prostrated.