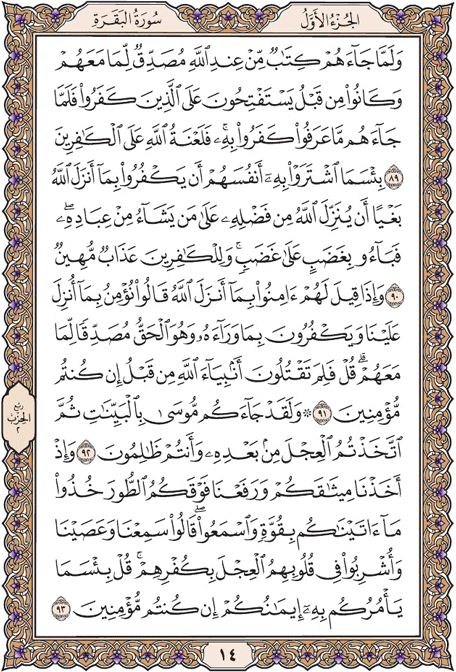 And when the Book was sent to them by God verifying what had been revealed to them already even though before it they used to pray for victory over the unbelievers and even though they recognised it when it came to them, they renounced it. The curse of God be on those who deny!

They bartered their lives ill denying the revelation of God out of spite that God should bestow His grace among His votaries on whomsoever He will, and thus earned wrath upon wrath. The punishment for disbelievers is ignominious.

And when it is said to them: "believe in what God has sent down," they say: "We believe what was sent to us, and do not believe what has come thereafter," although it affirms the truth they possess already. Say: "Why have you then been slaying God's apostles as of old, if you do believe?"

Although Moses had come to you with evidence of the truth, you chose the calf in his absence, and you transgressed.

Remember when We took your pledge and exalted you on the Mount (saying:) "Hold fast to what We have given you, firmly, and pay heed," you said: "We have heard and will not obey." (The image of) the calf had sunk deep into their hearts on account of unbelief. Say: "Vile is your belief if you are believers indeed!"