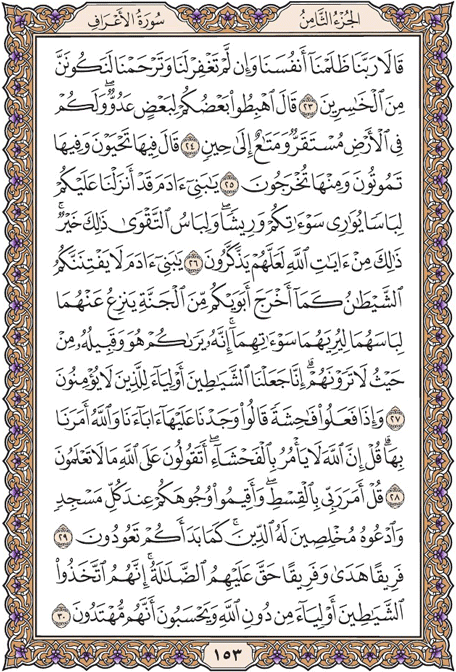 They said, |Our Lord, we have wronged ourselves, and if You do not forgive us and have mercy upon us, we will surely be among the losers.

[ Allah ] said, |Descend, being to one another enemies. And for you on the earth is a place of settlement and enjoyment for a time.

O children of Adam, We have bestowed upon you clothing to conceal your private parts and as adornment. But the clothing of righteousness - that is best. That is from the signs of Allah that perhaps they will remember.

O children of Adam, let not Satan tempt you as he removed your parents from Paradise, stripping them of their clothing to show them their private parts. Indeed, he sees you, he and his tribe, from where you do not see them. Indeed, We have made the devils allies to those who do not believe.

And when they commit an immorality, they say, |We found our fathers doing it, and Allah has ordered us to do it.| Say, |Indeed, Allah does not order immorality. Do you say about Allah that which you do not know?|

Say, [O Muúammad], |My Lord has ordered justice and that you maintain yourselves [in worship of Him] at every place [or time] of prostration, and invoke Him, sincere to Him in religion.| Just as He originated you, you will return [to life] -

A group [of you] He guided, and a group deserved [to be in] error. Indeed, they had taken the devils as allies instead of Allah while they thought that they were guided.