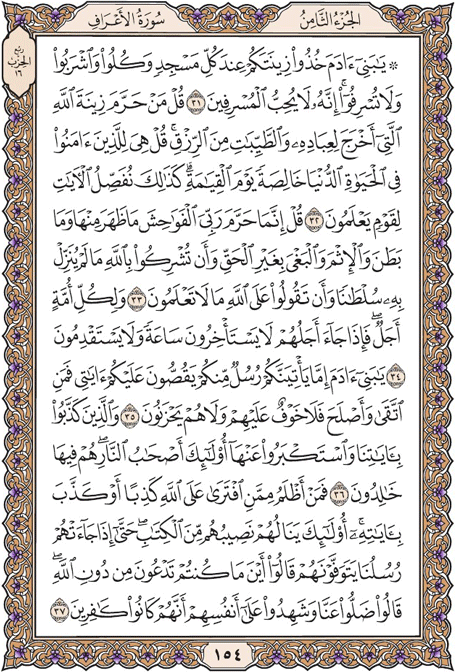 O sons of Adam, attire yourselves at every time of worship; eat and drink, but do not be wasteful, for God does not like the prodigals.

Ask them: "Who forbids you attire that God has given to His creatures, and the good things that He has provided?" Tell them: "They are (meant) for believers in the world, and will be theirs on the Day of Judgement." That is how We explain Our signs to those who know.

Tell them: "My Lord has forbidden repugnant acts, whether open or disguised, sin and unjust oppression, associating others with God, of which He has sent down no authority, and saying things of God of which you have no knowledge."

A term is fixed for every people; and when their appointed time is come there will neither be a moment's delay nor haste.

O sons of Adam, when apostles come to you from among you, who convey My messages, then those who take heed and amend will have neither fear nor regret.

But those who deny Our signs and disdain them, shall belong to Hell, where they will abide for ever.

Who could be more wicked than he who imputes lies to God or denies His revelations? Such as these will receive what is declared in the Book, and when Our angels come to draw out their souls and ask: "Where are they you worshipped other than God?" They will answer: "They have left us and fled;" and bear witness against themselves for being infidels.