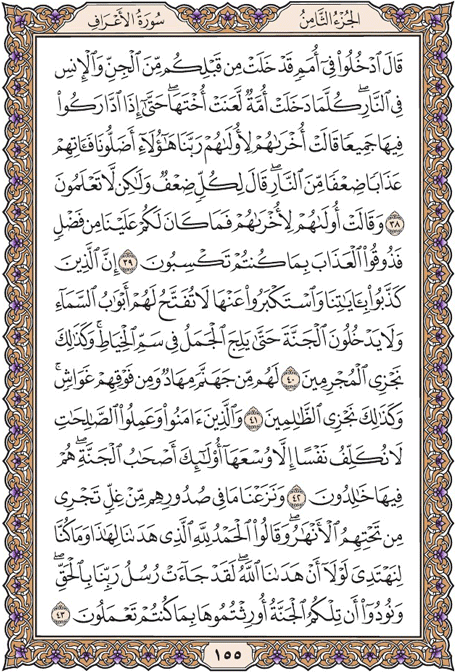 [ Allah ] will say, |Enter among nations which had passed on before you of jinn and mankind into the Fire.| Every time a nation enters, it will curse its sister until, when they have all overtaken one another therein, the last of them will say about the first of them |Our Lord, these had misled us, so give them a double punishment of the Fire. He will say, |For each is double, but you do not know.

And the first of them will say to the last of them, |Then you had not any favor over us, so taste the punishment for what you used to earn.

Indeed, those who deny Our verses and are arrogant toward them - the gates of Heaven will not be opened for them, nor will they enter Paradise until a camel enters into the eye of a needle. And thus do We recompense the criminals.

They will have from Hell a bed and over them coverings [of fire]. And thus do We recompense the wrongdoers.

But those who believed and did righteous deeds - We charge no soul except [within] its capacity. Those are the companions of Paradise; they will abide therein eternally.

And We will have removed whatever is within their breasts of resentment, [while] flowing beneath them are rivers. And they will say, |Praise to Allah , who has guided us to this; and we would never have been guided if Allah had not guided us. Certainly the messengers of our Lord had come with the truth.| And they will be called, |This is Paradise, which you have been made to inherit for what you used to do.