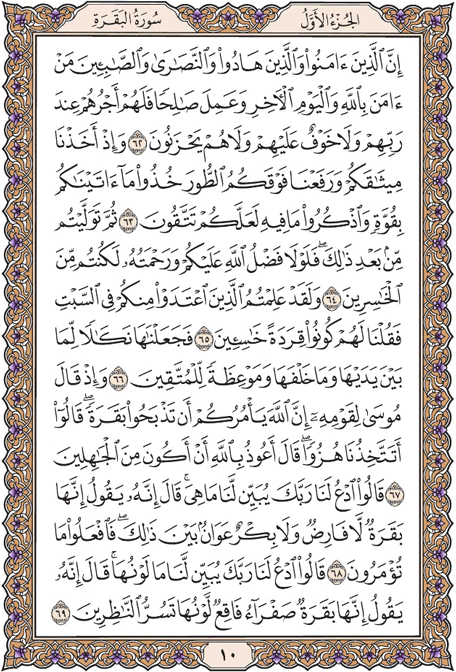 Indeed, those who believed and those who were Jews or Christians or Sabeans [before Prophet Muúammad] - those [among them] who believed in Allah and the Last Day and did righteousness - will have their reward with their Lord, and no fear will there be concerning them, nor will they grieve.

And [recall] when We took your covenant, [O Children of Israel, to abide by the Torah] and We raised over you the mount, [saying], |Take what We have given you with determination and remember what is in it that perhaps you may become righteous.

Then you turned away after that. And if not for the favor of Allah upon you and His mercy, you would have been among the losers.

And you had already known about those who transgressed among you concerning the sabbath, and We said to them, |Be apes, despised.

And [recall] when Moses said to his people, |Indeed, Allah commands you to slaughter a cow.| They said, |Do you take us in ridicule?| He said, |I seek refuge in Allah from being among the ignorant.

They said, |Call upon your Lord to make clear to us what it is.| [Moses] said, |[ Allah ] says, 'It is a cow which is neither old nor virgin, but median between that,' so do what you are commanded.

They said, |Call upon your Lord to show us what is her color.| He said, |He says, 'It is a yellow cow, bright in color - pleasing to the observers.' |