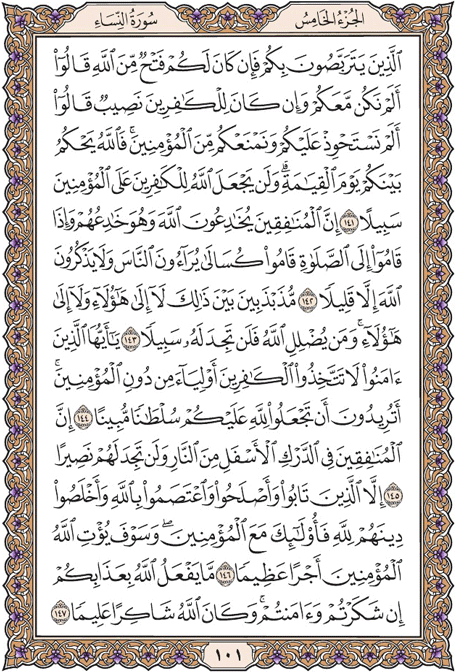 Those who wait [and watch] you. Then if you gain a victory from Allah , they say, |Were we not with you?| But if the disbelievers have a success, they say [to them], |Did we not gain the advantage over you, but we protected you from the believers?| Allah will judge between [all of] you on the Day of Resurrection, and never will Allah give the disbelievers over the believers a way [to overcome them].

Indeed, the hypocrites [think to] deceive Allah , but He is deceiving them. And when they stand for prayer, they stand lazily, showing [themselves to] the people and not remembering Allah except a little,

Wavering between them, [belonging] neither to the believers nor to the disbelievers. And whoever Allah leaves astray - never will you find for him a way.

O you who have believed, do not take the disbelievers as allies instead of the believers. Do you wish to give Allah against yourselves a clear case?

Indeed, the hypocrites will be in the lowest depths of the Fire - and never will you find for them a helper -

Except for those who repent, correct themselves, hold fast to Allah , and are sincere in their religion for Allah , for those will be with the believers. And Allah is going to give the believers a great reward.

What would Allah do with your punishment if you are grateful and believe? And ever is Allah Appreciative and Knowing.